Okay seems a little strange, doesn't it?
I assure you it makes sense.
I want the grand connect!

Guess it was a little too cryptic. The first two pics were that of Sachin Tendulkar and S.D Burman. Sachin was named after S.D Burman by his grand father( well known trivia), hence he was burman's NAMESAKE.
The second pic was that of Vanity Fair, which was also a novel written by William Thackeray
And the third pic has a peace symbol over Lord Rama (Shantaram)

The connect being Mira Nair. Since she is directing all the three movies that are being made after the books.

QM's note: Realised that the clues were seriously a little too cryptic, will give appropriate hints next time.

1. X is one of the most notorious unfinished movies, it starred Y along with many other stars from the era. Y had, at the time, recently undergone gallbladder surgery, and had dropped over 25 pounds, reaching the lowest weight of Y's adult life. The costume and hairstyle drawings depicted a new Y, much more sophisticated and stylish than any character depicted previously. Several years later another movie with the same name (well almost, technically) was made.


2. A-B usually consist of recurring characters in a common environment such as a home or workplace. The situation is usually that of a family, workplace, or a group of friends. The term was adopted to distinguish the C(short form for A-B) from other formats such as sketch comedy or humorous monologues/dialogues.

3. Who are required to sign that they "acknowledge and affirm" the following?


4. Please don't google this one.
Before the sensation that was Nadia Comeneci, there was another Y, from Belarus who stunned everyone in the 1972 Olympics with her flexibility(won three golds).President Nixon, upon meeting her at the White House, told her: "I have always been impressed with your ability to land on your feet.” Name Y

5. X Y Z was an all girl band active between 1990-1997. The name was derived by altering the name of a famous Monroe movie. The band came up with three albums, the second one being a tribute to their guitarist(who had died of a drug overdose) and a close pal, who was brutally rape and murdered.

Answer time:
1. Something's got to give is the movie and the actress is Marilyn Monroe, the movie made later was Something's Gotta Give starring Diane Keaton and Jack Nicholson
2.A-B Situation Comedy, C Sitcom
3. Hooters! Hopefully we'll get one in India next century
4.Olga Korbut, basic trivia for any sports enthusiast.
5. 7 year Bitch

More of the Same

5 comments Posted by Siddharth Ravichandran at 2:36 AM

Some more dry qns to keep the blog active....

We're not for sale.
Our work can be used by everyone, with a few conditions.
We speak Banyumasan…and 250 other languages
You can't actually change anything in here
We care deeply about the quality of our work.
We do not expect you to trust us.
We are not alone.
We are only collectors.
We're neither a dictatorship nor any other political system.
We're in it for the long haul.

2)"E_DIV" is an error code generated by some programming languages as a result of _________ ____ ______ and can be used in internet slang as an indication of confusion or impossibility.

5)______ ___________ was a celebrated citizen of San Francisco, California who proclaimed himself "Emperor of these United States" and later "Protector of Mexico" in 1859..In December 2004, a resolution was made to name the San Francisco-Oakland Bay Bridge in his honour, but failed.

6)Why did Ethipoia celebrate the new Millenium in 2007?

7)Nadja ("Hope" in Russian) was the first creature to conceive in space. Purely Current Affirs, what was it?

8)______ attempted to write a six word story as part of a Wired Magazine article but wrote ten words instead. ("God said, 'Cancel Program GENESIS.' The universe ceased to exist.") He refused to lower the word count.

2 comments Posted by Vivek Krishnan at 12:21 AM

1.Pretty Straightforward. Give me the name of the furniture maker. Clue: Cartoons

The chair's maker is Thomas Chippendale, more famous as a cabinet maker. As evident, his name was the inspiration for the Disney chipmunks Chip & Dale. :)

Google/Wiki if necessary.
Am sick of everyone stopping people from googleing, its an online quiz dammit. 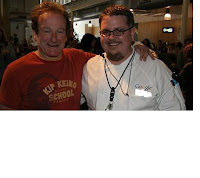 1.Go on, identify the guy ( corporal punishment for the one who utters the obvious)


2. Which Evil scientist(not a Lucas Creation) amongst other objects also possesses a Death Star. His "real" name is revealed to be Susan and his parents are hippies.

3. A sportsperson (X)(now dead) was attending a function for a revolutionary event and was asked by (Y) an extremely famous media personality, to put on a tie. X refused saying that he didn't wear ties, to which the Y responded saying that he'd put one on for his sake. Identify X and Y.

Answers:
1.That's google's famous chef Charlie Ayers(look at what the guy is wearing). Rumour has it that he used to cook for the Grateful Dead. He quit a few years ago to start his own venture. He is known to have revolutionised the food habits of corporations.
2.Ah-ahaha-ahahahahahahaha! Mandark, cracked by almost everyone
3.Ah this happened during the World Series cricket ceremony. X is David Hookes and Y is Kerry Packer. Well I should have mentioned that Y is dead too.

But what about irregular bre@sts?

Now that I have your attention
lets kick off:

1.There was only one vote against Mother Teresa in the election of Superior General in the Missionaries of Charity in 1989. Who cast the vote against her?

2.When Ram was in exile with Sita and Laxman, the local woman cast aspersions on Sita for living with two men. Sita in return cursed the women that they will have multiple husbands. Which place (according to one of the versions) gets its name from this?

3.Connect Manasarovar, a dance village on the outskirts of bangalore, a talk show host who acted in Jo Jeeta Wohi sikandar

4.This place was initially a lake. The municipal authorities wanted to connect it to the sea by a canal so that it could become an alternative city harbour until 1855, when an earthquake hit it (measuring 8 on the richter) and uplifted the area by nearly 2 meters making it a swamp. It is now a famous cricket ground. Name it

5.Whats is known as "The pale blue dot"?


Okay here are the answers:

1.Well when it concerns selfless stuff, who else, mother theresa herself!
2.well how many places do we know with a number in them?
Chattisgarh!
3.Protima Bedi. The dancer who streaked in broad daylight. Married to kabir bedi. She founded a dance village Nityagram on the outskirts of b'lore. She died while on a trip to kailash mansarovar and is the mother of pooja bedi who hosts a pathetic talk show on zoom tv( pooja acted in jo jeeta wohi sikander)
4.Basin Reserve (with googling allowed this shouldnt have been too tough)
5.This is the pic of the earth taken from the voyager!

1 comments Posted by Vivek Krishnan at 10:15 AM

People've been asking me for clues, so here's one:a major one too. He's Indian. 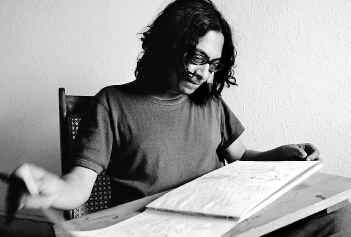 Had saved these questions and others up for a SEQC but looks like we won't have any more this sem...thanks to our lethargic Sec...anyways this should revive our now atrophied quizlog...
As always, gglr's won't be tolerated.

1)His name is now synonymous with betrayal against his home country, when he sided with the invading Nazis during WW2.

3)Wolfram Freiherr voh Richthofen of the Condor Legion was involved in which famous air raid?


4)Connect...
"Chavez ravine, a Los Angeles story"
"The last express", a Comp game
"Karateka"
These are the not so famous works of this stalwart...

5) What are these (Be specific)

ANSWER TIME -
1)Vikdum Quisling, Norwegian leader during WW2
2)Identities assumed by Netaji Bose during his travels
3)The Guernica air raid during the Spanish Civil War (the Condor legion was formed during the Civil War)
4)Jordan Mechner
5)American Dialect Society's Word of the Year

3 comments Posted by Vivek Krishnan at 12:42 AM 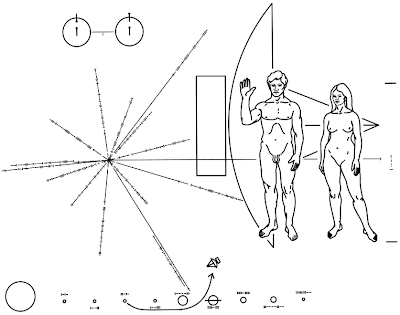 1.Where would you find this plaque??

This is the Plaque on the Pioneer, that was sent out of the solar system. This plaque was put there as a message to extraterrestrials.